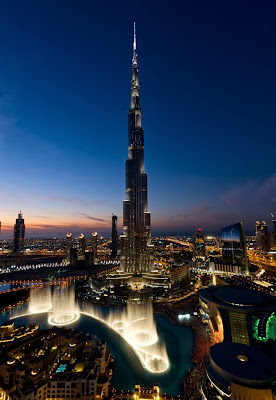 Many of you already know that Burj Khalifa is the world TALLEST tower that world has ever seen.  It is a stunning work of art integrated with sophisticated engineering. Today, I would like to share some facts of Burj Khalifa, which might blow your mind! Let’s take a look some of the facts:

Where is it?
Dubai, United Arab Emirates
When its construction started and completed?
Construction started in January, 2004 and completed in January 2010.
How much it cost to build it?
1.5 Billion Dollars*
Who’s the Burj Khalifa’s Architect?
Adrian Smith
What is the total height?
Over 828 meters or 2717 Feet.
How many floors?
It has 163 floors
How many workers are needed to clean its window?
It takes a team of 36 cleaners and spend 4 months to clean Burj Khalifa’s over 24347 windows!^

Also check out this coolest picture! I love it. It shows human fascination for building magnificent structure started long time ago. Think about the Pyramids in Egypt!